Summer of 1952, Doyle Russell loaded up his family of six, into their 1929 Chevrolet truck, leaking fumes and outfitted with a homemade canvas cover stretched over the back, a truck Doyle’s daughter Mary affectionately dubbed “Tooky” for that was the sound the engine made as it puttered along, tooky, tooky, tooky…, and ventured away from his once-again-hailed-out wheat crop in Weld County, chugged up over the Continental Divide, and moseyed into the high valley country of Western Colorado, peach country. His hope was to find an affordable peach farm where he and his family could prosper and get away from the hardluck dryland farming in Weld County.

I don’t know how many inquiries he made over there but I do know that his plan didn’t pan out and soon the family returned home, the truck laden with peaches, many of them bruised and overripe but suitable for canning and preserves.

Bob Russell remembers that trip well, especially the trip home, for he and his brother, Ken, and sister Mary rode in the back with all those peaches, actually perched atop those baskets of peaches. The two older kids invented a game, picking up some of the riper peaches, grading them on just how “ugh” they were, then tossing them into the road ditches, all the while making sure Doyle and Frances did not witness this. Bob joined in to their scandalous game.

To this day, in August of the year when 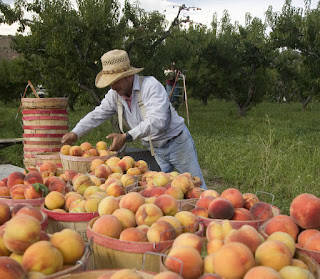 Palisade peaches make their way to our roadside stands from across the divide, and I bring home a box of them for our enjoyment, Bob bends over the peaches, inhales their fragrance, and recalls that summer excursion, an a 64-yr-old memory brought to life again for just a moment. How different his life would have been, the son of a Palisade peach farmer, growing up on the Western Slope, away from the crowds and traffic of the Front Range.

Instead Doyle Russell bought yet another dryland farm, about four and a half miles north of Wellington, right along the road that was soon to become I-25, the busiest thoroughfare in Colorado. The family lived there for the next forty-seven years and rarely thought of that trip across the mountains, that other lifestyle that almost was.
Posted by Russell at 11:59 AM