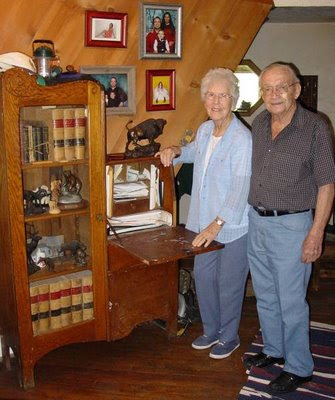 We had a delightful visit in June, 2009, from Rosa Ellen Farrell and Bud Stratton. They were on their way back to Idaho after attending a wedding in Las Vegas and then a visit with Bud's family in Denver. Rosa Ellen is the daughter of Rosa Smith Fairchild Crain who was a sister to Bob Russell's grandfather Tom Smith. Rosa Ellen is the only living Smith family member who lived over in Moffat County during the years between 1915-1924 when the family homesteaded there. Rosa was just a tiny baby when the family made the big move from the Youghal community west of Craig to Purcell, Colorado in Weld County. Rosa and her parents traveled by automobile while her cousins, the Tom Smith family, made the trek on horseback and pulling wagons, herding cattle over Rabbit Ears Pass late in the fall. See photos and stories of that trip http://www.viewoftherockies.com/CraigtoPurcell1.html
The photograph I'm including here shows Rosa Ellen and Bud standing next to an oak secretary that Rosa's father, Art Fairchild, brought from Nebraska to Moffat County in the early 1920s for his bride, Rosa Jeanetta Smith Fairchild. Many years later Art gave this lovely piece of furniture to Frances Russell and she in turn gave it to her son Bob Russell. Rosa lovingly touched the secretary while she told us their gold-rimmed oatmeal bowls use to be stored on the second shelf and inside her father kept his stamps and letters.
Rosa is a beautiful and gracious lady and her companion, Bud Stratton, is a fine man who has known Rosa since she was fourteen years old. Bud is a brother to Shirley Stratton who married Ollie Smith, Frances Smith Russell's brother. That makes Bud a shirttail relative.
Posted by Russell at 8:27 AM 1 comment: