I'll start by saying, I never met the man. Tom Smith died December 29, 1960, twelve years before I became a part of his family. He was my husband's grandpa on his mother's side. Sadly, Bob's grandpa on his father's side, Elias Russell, also died that year, on January 19. Growing up in a farm family closely tied to the land, livestock, and daily chores, Bob had limited contact with either of his grandpas but a little more with Tom Smith as Tom lived in Colorado the last 35 years of his life, within a day's drive of his daughter Frances Smith Russell and her family, which included son Bob. Every summer the Smith clan met at a park in Denver or Greeley for their annual picnic and family reunion and some years that was the only time Bob saw his Grandpa Smith, but it was enough to develop a strong liking for the man. Bob was 18 the year he lost both of his grandfathers so his memories of them are childhood memories.
Thomas Alvin Smith was born August 24, 1889 in Paris, Texas, the first of ten children born to William Franklin Smith, known by most as Frank Smith, and his wife Sarah Frances Buchanan Smith. We know very little about those early, formative years Tom lived with his family in Texas. By 1893 they were in Noble, Oklahoma on a homestead near Frank's only brother John. Family lore has Frank racing in the Oklahoma Land Rush for that parcel of land near Noble. In 1909 the family moved on to Weatherford, Oklahoma where Tom met his wife-to-be, Nora Olive Jones, one of the Jones girls, nearby neighbors. They were married on Tom's twenty-first birthday; Nora was seventeen.

A neighbor and shirt-tail relative of Toms, Robert E. Morris, was a land speculator in Moffat County, Colorado and probably lured Tom and his brother Jim to that far northwestern corner of the state where homesteading was not only encouraged but solicited.

Jim had been married for a short time but Bessie took a look at that forlorn vista in Bear Valley and quickly returned to Oklahoma. Jim filed on a claim about 20 miles northwest of Elk Springs, Colorado in Moffat County, and so did his father. In 1915 Tom's wife and children traveled by train from Oklahoma to Craig, then by buggy out to their new home, a hastily built cabin on the high, dry plains of Bear Valley (some call it Bare Valley). Tom's parents also made the move to the new land and brought their children, cattle and horses on the train.

If Tom had known in 1915 what his future held he probably would have sat down on a stump and cried. In 1918 Tom's wife, Nora, died in the Spanish Flu Epidemic just weeks after giving birth to a daughter, Jennie Frances Smith who would later become Bob Russell's mother. Tom's parents took Frances into their nearby home leaving Tom and Nora's older three children with their dad. Within a year Tom traveled across the Continental Divide to bring home a new mother for his children, the widowed wife of his first wife's brother, Chloe Callender Jones. Three hard years later Tom's father, Frank, and brother, Jim, were shot and killed by a neighbor after arguing about a shared field of potatoes. Tom still tried to hang on to the land in Bear Valley but when his stepson got in trouble with the law and was given the option of leaving town or facing charges the family pulled up stakes and headed east to Purcell, Colorado where they had family. There is more about that trip here Craig to Purcell. 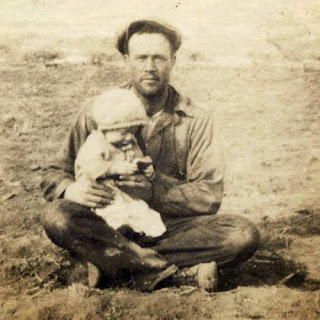 From that time of exodus from Bear Valley until the end of his life in 1960 Tom kept his family fed. The first years in Weld County he rented farms where he grew crops and raised livestock but that country is dry, windy, and prone to hail storms. He and Chloe brought three more children into this world, two who lived and one buried out on the plains. About 1929 Tom bought several pieces of brand new farm equipment but had them repossessed when the Depression hit. Drought and the death of Choe's son, Frankie, added to the family woes. Tom lost 29 head of cattle to starvation the same winter that Frankie died.

In Frances Russell's autobiography she tells that 1936 was Tom Smith's last year to farm. He got a job for the state as a liquor inspector, moved his family to Arvada, and bought himself a brand new Chevrolet car for six hundred dollars. Life got a little easier for Tom and Chloe in Arvada and the memories of their two youngest children, William and Marion, spoke of a kinder, gentler Tom Smith than the man remembered by his older children.

And that brings me back to the reason I wanted to write about Tom Smith, to try to define the man but not pass judgment. When he lived out in Bear Valley he was young and inexperienced,  struggling to survive on land that was only good for growing potatoes after grubbing out acres of tenacious sagebrush using hand tools and reluctant children. Tom had a short temper and little patience with his strong-willed children and ornery horses. Raised by parents who kept their bibles close at hand, Tom disciplined his children harshly "for their own good." 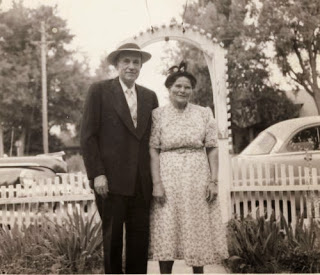 Later in life, long after Tom had passed away, his oldest daughter, Ola, could find very little good to say about her dad but she was like him in so many ways - his mannerisms, speaking voice, penchant for telling a good story, so that I was told, "You want to know what Tom Smith was like...take a look at Ola."

Bob Russell remembers his grandpa as a man who liked to play cards, drink coffee, smoke cigarettes and tease the womenfolk. He called his daughters "sister", his granddaughters "daughter" and used colorful language to embarrass them.."your little titty, sister". Tom liked his whiskey and even when times were really lean he usually had a bottle hidden out side the house where he could have a nip or two. No one would ever say Tom handled money wisely or planned well for the future but he and Chloe kept a home where friends and relatives were always welcome to sit at their table, share Chloe's delicious meals, listen to Tom's entertaining stories, and spend the night.

Tom's grandson Kenneth Russell summed up his assessment of his grandpa with these words, "He did the best he could with what he had," and what more can you ask of a man? I think Tom was a much more loving grandfather than he was a father but by the time the grandkids came along Tom didn't have to fight so hard to keep the wolf from the door.