Story of an Old Russell Gun

Recently a cousin suggested on facebook that we each tell about our oldest inherited possession and post a photograph. Mine was an old quilt, undated, but probably made in the 1930s by my maternal grandmother. 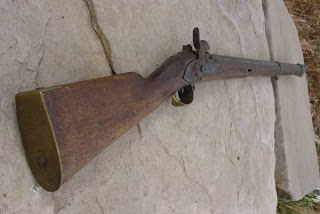 I asked my husband what his oldest inherited possession was and he didn't hesitate as he told me about his 1826 smooth bore musket and how he came to own it. He said it's not a particularly valuable gun and never was, that its age is its best feature. It was made in Germany, number 8209 of its batch, and fired the Hat cap which was not that common. But the fact it is a Civil War era musket passed down through the family makes it a treasured keepsake.
Bob told the story to me this way....the gun belonged to his grandpa Elias Russell of Cass, Arkansas, but because the gun was missing a crucial piece of the trigger release mechanism and wouldn't fire, Doyle, Elias's son and Bob's father, didn't want the gun, didn't think it worth taking back to Colorado. So Bob's mother, Frances Smith Russell, laid claim to it and took it home.
Years later Frances's brother Ollie was visiting the family and told Doyle that the old musket was worth a kazillion dollars on the Denver gun market so Doyle told him to take it and sell it. Ollie kept the gun for years and finally brought it back, unsold, with the explanation that the market had fallen. Bob was then allowed to keep the old gun in his room. One day he was messing with it, as young boys are wont to do, and tipped the barrel down. Lo and behold, a handful of dimes rolled out of the barrel onto the floor. The next time his Uncle Ollie came to visit Bob told him about the dimes. Ollie said, "Oh yeah, I kept that gun behind the door next to my shotgun and when I'd come in the house at night I'd drop a dime down the barrel of my shotgun. I must have missed a few times and dropped the dime down the barrel of the musket." Bob had to give up his dimes to Uncle Ollie for who could argue with that story? A handful of dimes at that time was a lot of money for a boy to find and then have to part with.
Posted by Russell at 4:16 PM No comments: