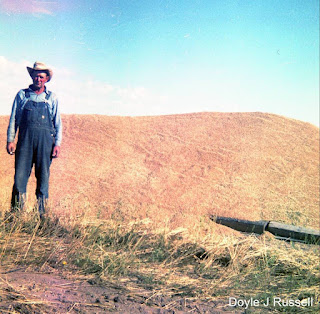 When Robert Doyle Russell joined the Navy in April of 1962 he left his parents’ home in Larimer County, Colorado, a farm/ranch where he and his family had lived since 1953.  RD’s father, Doyle J Russell, was a dryland farmer who grew Hard Winter Wheat, “Turkey Red”, a grain that grew well on dry land with no irrigation water as long as a few rains came at the right time of year. Doyle also raised cattle, sheep, hogs, chickens, and kept a milk cow. He was a successful farmer because he was a hardworking man, never borrowed money, bought used farm equipment, and carried crop insurance. Also, his wife raised the chickens and milked the cow, sold eggs and cream, and canned fruit and vegetables for winter use. 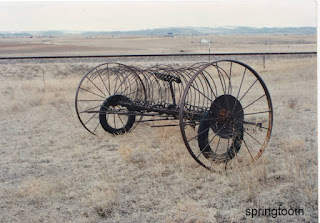 And then the State of Colorado created I-25 Interstate Highway that cut right through Doyle’s land. No longer was he able to pasture his cattle on the east portion of his property then bring them home at night. Nor could he drive his tractor directly to those eastern fields for crossing the interstate that way was illegal. And I am sure that losing his right hand man, RD, to the Navy, affected his ability to keep up the farm. Consequently, when RD came home from the Navy he was shocked at the change in his dad’s place. 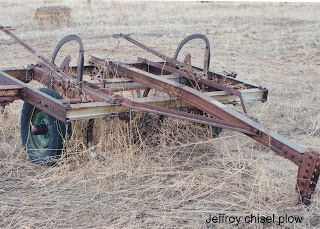 Doyle, being the resourceful man that he was, had sold the cattle and created a junk yard on his land. He soon became quite successful at acquiring automobiles, trucks, and other vehicles that people didn’t want or could no longer park in front of their homes, and then he sold off parts. Sometimes he sold entire vehicles but said he made more money parting them out. As the junkyard grew he accumulated all sorts of “stuff” that he could resell and he enjoyed it so much, loved talking to people who stopped in, made lifelong friends that way. And he made more money selling junk than selling cows. 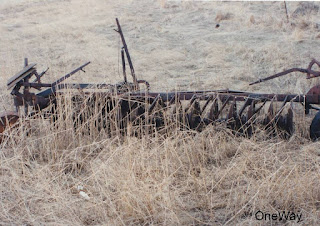 But the junkyard was unsightly! It was an embarrassment to his family. He filled the yard by the house with things easily stolen, like bicycles, kiddie cars, and tools. And covered acres and acres with vehicles, furniture, tires, piles of wood scraps, all sorts of odds and ends. Doyle was not embarrassed, as far as I know. He knew right where everything was and could walk directly to it if someone came searching for a car part or TV or posthole digger. He kept track of his inventory in his mind, never made lists or maps. 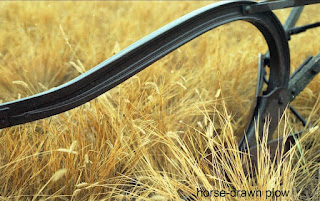 Once, in the 1970s, he granted permission to a group of artists who wanted to paint what they saw out there on the farm land littered with treasures. I understand that, for I have often seen the beauty there myself. I loved the way the native grasses grew up around the old farm machinery. When I saw that equipment parked out back of the house my imagination caught fire. I could visualize Doyle preparing some fields for planting, lightly plowing others for summer fallow. 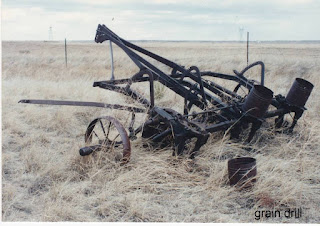 RD once told me how, at a young age, he learned to balance while standing on the back of the wheat planter, aka grain drill, as his dad pulled it with a tractor across the plowed fields. RD’s job was to make sure flow of grain into the soil was not plugged. Had he tripped and fallen into the machinery he would have been seriously injured so learning to balance and ride that rickety, bouncing planter was essential. Later in life, when he went through Underwater Demolition Training in Coronado, California, he realized that his years on the farm had prepared him well for the challenges he faced in the Navy. 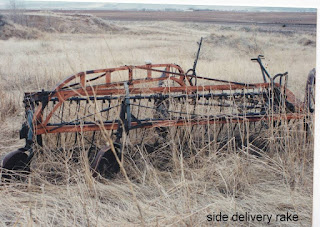 I thought about the photographs I wanted to use to illustrate this story and I remembered that an artist I admire when asked the secret to his success as a landscape artist answered (and I paraphrase) “I paint what I see then remove everything that isn’t necessary.” So, I am not showing all the junk in Doyle’s yard. Instead I am seeing the beauty in the old farm equipment. And I see the images of Doyle making a living with a few pieces of used farm equipment and a whole lot of hard work.
Posted by Russell at 12:08 PM 3 comments: