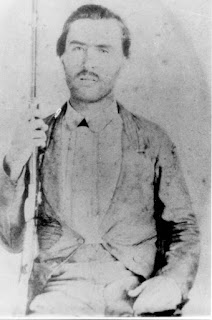 James Marion Russell was born in 1835 and died 3 October 1863, at the age of 27.  His wife also died in 1863 leaving their children as orphans.  The orphaned children were farmed out to various relatives and grew up as “poor relation”.  None of the children amounted to much as adults.  They really did not have a chance.

James Marion Russell was drafted into the Confederate Army—14th Regiment, Arkansas Infantry---much against his wishes.  He did not want to leave his wife and children to shift for themselves while he went to fight a war he did not believe in.  Family history, as it has been handed down from generation to generation, tells the story of how the officials came to James’s home, drafted James Marion and forced him to come with them.  James was told to shut up and “don’t look back” at what he was leaving behind.  Thusly did James Marion  became a soldier in the Confederate Army.

Shortly before James Marion was drafted, he had “proved up” on his 160 acres of homesteaded land.  His land patent was signed by President James Buchanan on February 1, 1860.  Three years, seven months, and two days later James lay dead on a battlefield in Corinth Mississippi.  The whereabouts of his grave is unknown.  An estimated 7,197 American soldiers were left dead when the Battle or Corinth was finally over.  It is most likely that James Marion’s final resting place was in a huge mass grave along with hundreds of his fellow soldiers.

James Marion actually fought in only one battle before he died.  On September 19, 1862, he survived the Civil War battle at Iuka, Mississippi.  James contracted yellow fever at some point between September 19, 1862 and October 3, 1862, and died of yellow fever complications while the Battle of Corinth Mississippi raged around him.  James Marion Russell held the rank of corporal at the time of his death.

Bless you and may you rest in peace, Great-Great Grandpa James Marion Russell.

Posted by Russell at 1:35 PM No comments: