Our Smith Family is Better Known to Us Now

In 2007 Mary Russell Simms, daughter of Doyle Russell and Frances Smith Russell, decided she wanted to host a gathering of her mother's family, the William Franklin Smith descendants. Aware that a few of the Colorado-based Smiths were meeting each summer in Windsor, Colorado, she wanted to expand on that to include all the far-flung relatives across the nation. That huge effort culminated in a family reunion held near Oklahoma City mid-September 2008. Sixty-two attendees made the gathering a wonderful success with cousins united after years of separation. Thanks to Mary's searching out distant kin there were cousins there who had never met one another. 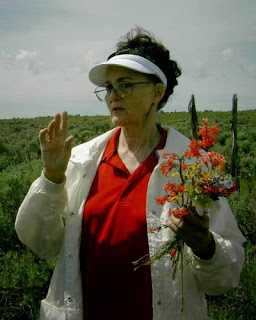 Each year after that Mary coordinated reunions of her Smith family, the most ambitious of which was a gathering in Moffat County, Colorado to visit the home sites in Bear Valley, northwest of Craig, where the Smith family lived in the early 1900s, where Grandpa and Uncle Jim, aka William Franklin Smith and his son James Wesley Smith, were murdered, and where Mary's own grandmother, Nora Jones Smith succumbed to the Spanish Flu of 1918. Only one reunion had to be cancelled and that was last year, 2013, when tornadoes lay waste to areas around Oklahoma City. 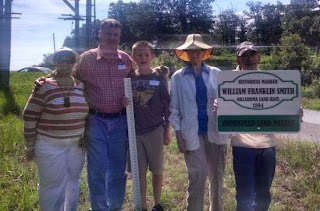 This year's reunion is now history. Mary accomplished her goal of erecting a sign on the land her gr-grandfather homesteaded near Noble, Oklahoma in 1894. The attendance this year was very small, an indication that interest has waned, old age has taken its toll, and the bad economy is affecting us all. But we can all be thankful to Mary for bringing us together again, the descendants of William Franklin Smith and his brother John Alvin Smith, for teaching us about their lives and our connection to them. We now know that we are a hardy bunch, healthy, good looking, and prosperous. But we do share a hereditary hearing loss and Mary researched that too, encouraging all family members to share their audiology profiles which culminated in Mary's book "The Smith Family Curse."
I would personally like to thank Mary for all the hard work she put into this study of her mother's family, for bringing us together year after year, and for accomplishing her goals of posting permanent markers on the land and publishing the results of the hearing loss study. Thank you, Mary. You persisted where others would have given up years ago. Great job!
Posted by Russell at 7:52 AM No comments: