Elias Russell in 1958 Article about Old Gold Mine. 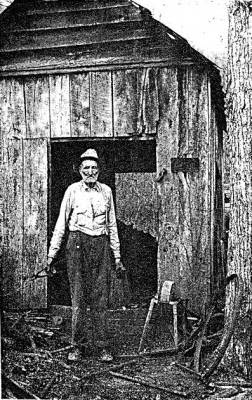 Is There Gold Near Cass?

A long-ago search for hidden treasure in Franklin county was fruitless but gave rise to some questions still unanswered.
Only another prospector, with mining in his blood and money to invest in an abandoned mine, is all that is needed to start a new gold rush in the mountains near Cass.
Now a ghost town, Cass was a flourishing lumbering center when interest was aroused over a Spanish legend, near the turn of the century.


(Caption under Elias' photo reads: "Mr. Russell who protected Mexican Charley from the mob, was deputy sheriff 22 years. He once hauled nine men 17 miles in his wagon to jail and two others being sent to the penitentiary.)

According to the legend, Spaniards prospecting for gold during the Civil War feared bushwhackers and hid a large number of gold bars and a huge gold cross in a partitioned room underground, somewhere in the mountains. Strange markings high up on an overhanging ledge and a deposit of a peculiarly red earth underneath the ledge, were said to indicate the location.

Dr. Tobe Hill, then a practicing physician at Mulberry Station, now Mulberry, 30 miles south, became so interested in the legend that he quit his practice and devoted 20 years and a tidy fortune, searching for the gold.

Floyd Turner, 72, who was born and reared on 160 acres where the mining claim was staked, said his grandfather, George Turner, first owned the land. He went to war and never came back. Then his father George Washington Turner, bought the interests of the other heirs and sold the land to Dr. Hill for $750.

Dr. Hill visited mining centers in the West looking for someone who could read the strange markings and brought back a man, part Pueblo Indian and part Mexican, known as “Mexican Charley.” Charley said he could read the markings and locate the gold by a much worn blueprint he brought with him. He was placed in charge of the mining crew. When news about Mexican Charley and his blueprint spread, it became necessary to emply men with guns to keep the crowds of people back so he and the miners could work.

The country went wild with excitement when Mexican Charley announced he had located the cap rock, that it would be raised on a certain day and that everyone present could look down upon the gold. A hurried trip was made to Little Rock to arrange for delivery of the escheatage to the state and to obtain police protection in handling the gold.

When the day came to lift the cap rock, the cove was filled with an immense, expectant and excited throng that milled about for hours, waiting for Charley to appear. But Charley was not to be seen by them that day. Prewarned of the possible danger that might result from a deception, he remained in hiding. Before the day ended, it became necessary to give Charley official protection when the angry crowd began calling for him to mob him. He was given orders the following day to leave the country and never return.

Later, a man, Joseph Palmer, who said he could locate the gold by witching, came to the mine. To test Palmer’s powers, some coins were hidden, and he was asked to find them. His witching rod was a three-pronged peach tree switch. He slit each prong near the end and placed a silver coin in one slit, a gold coin in another and a copper coin in the third. He held the switch in his hand, with coins level, as he walked about the grounds. He finally found the coins but said the switch pulled harder toward the mine. He wanted to witch over the mine but was not permitted.

Dr. Hill paid big wages for laborers to work in the mine – as much as $5 a day in that time when wages were low – and kept six to 30 men working, eight hours every day, for many years. He died believing the buried treasure he had not found was still somewhere in the earth.

His Lonquil Mining Co., it was said, sold at least 232 shares of stock at prices ranging from $25 to $100 a share, to people in Ft. Smith and other towns in Arkansas, Texas and Oklahoma. J. L. Henson and J. H. Johnson, both of Ft. Smith, were president and secretary of the company.

Following Dr. Hill’s death and the failure of the mining company, interest in the mine lulled for a time. But through the years an occasional prospector had drifted in and started operations again.

The last to own and operate the mine were G. W. Glaze and his wife, from Salt Lake City. He was a prospector and artist-sign painter. Both he and his wife mined for the gold. Mrs. Glaze died in their cabin near the mine, from a heart attack, about three years ago. Soon after her death, Mr. Glaze left as suddenly as he had appeared, apparently abandoning everything, and has not been heard from since.

Mrs. Sarah Arbuckle, a widow at Cass, who lived near the mine when her husband worked there has vivid recollections of the mining boom and events that took place. “I knew Marion Hammond, George Martin and John Morehead who dug for gold many years – until they died, also a man named Douglas who burned to death in a house near the mine, and Charley Austin who was accused of squandering some of the mining company’s money, pleaded insanity and still lives somewhere back in the mountain,” she said.

Mrs. Arbuckle owns a share of the mining stock. “But never got anything out of it,” she declared. Her idea about the whole thing is: “When interest in the legend ran high and they started mining ore was brought from Joplin, Mo, and hidden in the dirt. That fired the works.”

Elias Russell, still active at 85, has lived within three miles of the mine all his life. He hauled lumber from his sawmill to the mine and was deputy sheriff 22 years during the mining operation. It was Mr. Russell who protected Mexican Charley from the hands of the mob. “Interest in the mine was high here and everywhere then,” he said. “Women, as far away as Dallas, Tex. Sold their feather beds for money to buy the mining stock, and lots of people would buy it again if it got started again. I always thought the place was just an old Indian village site and what they found were Indian bones and trinkets.”

The mine is in a picturesque, timbered, rock-strewn cove, walled in by mountains. The cove is, roughly, a quarter of a mile long and 200 years wide, with overhanging ledges and perpendicular cliffs, 50 feet high in places, on either side. Sparkling Cove Creek cascades down a gulch between the mountains and flows into nearby Mulberry river.

Seven tunnels, on both the north and the south sides of the cove, large enough for the small donkey-drawn cars on which the dirt was hauled out over narrow gauge tracks, extend far back underground from the bases of the cliffs. Some of these tunnels are filled with muddy water, while others have become springs. One is 20 feet deep.

While the old mine is seldom talked about any more by anyone in the locality, certain questions lie dormant in the minds of many old-timers who witnessed or were a part of the prolonged search for the gold. The strange markings high up on the ledge, the witching rod that pulls toward the mine, (Mrs. Arbuckle said: “I saw it pulling”, Charley’s blueprint and the origin of the legend itself, have never been explained to their full satisfaction.

Many thanks to Robert Myers for providing this 1958 magazine article, written by Steele T. Kennedy.
Posted by Russell at 3:41 PM 2 comments:

Today is the Big Day!

Today our Smith Clan is gathered over in Moffat County, Colorado, north and west of Maybell at a location best known as Bear Valley. Between approx. 1915 and 1923 several families of our relatives from Oklahoma and Texas homesteaded in that high, barren ground of northwestern Colorado but after a series of tragic deaths and failure to thrive in that remote and arid land the family packed up their homemade covered wagon and with the older children driving the cattle horseback set out to cross the Continental Divide in late fall of 1923. They all made it through the snow and cold to settle in Purcell, Colorado, now a prairie ghost town and never much more than that.

The survivors and descendants of that rugged band of pioneers are visiting the old homesteads and erecting signs with names and dates of the ones who lived and died there so that in years to come the grandchildren and great grandchildren will find it easy to locate those tracts of land in that uninhabited valley where dinosaurs once roamed. Yes, this land is just east of Dinosaur National Monument and south of Flaming Gorge National Recreation Area and adjacent to that infamous Browns Park, Colorado where outlaws once holed up from the law.

But most tourists who visit those three famous sites will never know of Bear Valley, also known as Bare Valley, and rightly so. It's off the beaten trail, privately owned land with unpaved roads and no trees in sight. But it means a great deal to those of us whose grandparents and great-grandparents took their hopes and dreams up there only to come away beaten and heartbroken after leaving three of their own buried at the little cemetery in Craig.

My thoughts are with you today, my Smith Clan relatives who made the big trek to Bear Valley today. May the good weather hold, your tires stay aired, and the click, click, click of cameras echo through the valley.
Posted by Russell at 9:08 AM No comments: