What About Those Joneses? 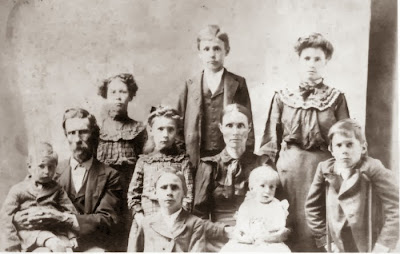 There is an entire branch of our family about which I've not written and that is the Jones family of Oklahoma. James Archibald Jones was born in Kentucky in 1848 and before he died in Choctaw, Oklahoma in 1917 he had fathered twenty-two children with two wives, tired, worn out wives. One of his daughters from his second marriage was my husband's maternal grandmother, Nora Olive Jones Smith. When she died at the young age of twenty-five of the Spanish flu which swept the world in 1918 her family blamed Tom Smith for marrying her and taking her nine hundred miles north of Oklahoma City to that God-forsaken country in Moffat County, Colorado known as Bear Valley, or Bare Valley, which seems more fitting.

There was such a rift in the relationship between the Joneses and Smiths that little Jennie Frances Smith, the child born to Nora just six weeks before she died, was never to know her Grandma Eliza Jane Holcroft Jones even though she lived until Frances was thirty-two years old. But after Grandma Jones passed away several of her children contacted Frances and letters flew back and forth explaining, apologizing, and seeking friendship. Frances savored those letters and devoured all information about the mother she never knew and all the aunts, uncles and cousins, most of whom she would never meet.

Frances favored the Joneses in her looks and mannerisms, a feisty, high-spirited girl with flashing brown eyes and a slender lithesome body. I'm sure the Jones family saw in Frances the sister who moved north and never came home again. When Frances died in 1990 some of the letters and most of the photographs of the Jones family she had collected survived and passed down to her son Bobby, my husband. Now I study the faces and try to connect them to the names jotted on the backs of the photographs trying to determine their relationship to us.

In June 2013 I got an email from a woman who found my genealogy website and told me she is a great-great granddaughter of James Archibald Jones, descended from one of the children of his first marriage to Sarah J. Brammer. She asked if I can confirm the family story that James A. Jones was a traveling evangelist throughout the Choctaw Nation and that Jones is Choctaw. Unfortunately, I could not confirm that but she and I have become Facebook Friends and will continue to share any information we find about the Jones family. Claudia is the first Jones family member I've known and I'm excited to learn more about this branch of our family tree.
Posted by Russell at 1:31 PM No comments: