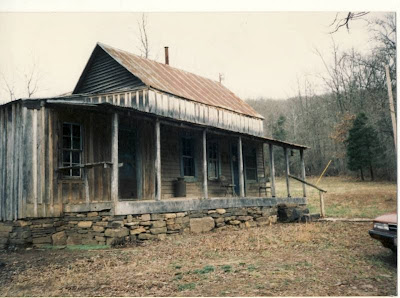 (photo above taken by Kenneth Russell during his visit there in 1994)
Elias Russell and his wife Addie Jane Mahaffey Russell lived their entire married lives in the house he built near Cass, Arkansas about 1901. I could be off a few years on that date as he may have started the house before he married Addie Jane on September 22, 1900. They reared twelve children there and after Elias died January 19, 1960, Addie continued to live in the house for a few more years before their oldest daughter, Bertie Lee Russell, insisted her mother move to town, a move that Addie was very much against. Addie died December 7, 1970, and I hope she was able to visit her old home often, but I don't know that for sure.
In 1991 the new owners of the property, Bernice and Curtis Cowan, restored all six of the buildings on the place. Elias and Addie's son, Seldon Russell, who lived nearby, visited the property with one of his daughters, Teresa, and took photographs of the buildings in their restored state. He also made a video of his visit, explaining as he walked around how each building was used by his parents. I have posted those photographs on a webpage here http://www.viewoftherockies.com/cass1.html
Seldon passed away in April of 2008 and I believe the Cowans are gone now too. As I write this in 2013 I don't know who currently owns the old Elias Russell place or what condition it is in but I'm eternally grateful to Uncle Seldon for sharing his photographs of the restored homestead with us.
Posted by Russell at 10:11 AM 3 comments: 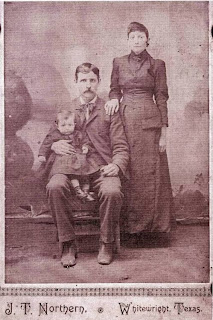 My blog has reached out through cyberspace and reeled in a new Russell cousin, one Herbert G. Reid, a second-cousin to Bob, one who has great stories to tell of his childhood there in Franklin County, Arkansas. We've exchanged emails and photographs and family connections over these last couple of weeks and that has rekindled my interest in the history of the Russell/Turner family in Franklin County, particularly around Cass, Arkansas.

I say Russell/Turner for there is one amazing lady, Mariah Tennessee Turner, who has sparked my interest for many years. She was my father-in-law's grandmother on his dad's side, so that makes her Bob's gr-grandmother. As those of you who know me already realize I am related to these Arkansasers (or Arkansawers) through marriage only, but they have worked their way into my heart and family they are.

Mariah was the daughter of Elias T. Turner and Sarah Durning Turner, the seventh of nine children born to them. In the spring of 1871 when she was eighteen years old she married John Woodard Russell in Cass. Mariah, known as Tenn, Tennie, and Aunt Tenn later in life, came from a prosperous family with land holdings and a good reputation amongst the neighbors. John Russell had been orphaned early in life with his father dying in Corinth, Mississippi while a confederate soldier in the Civil War. To keep the record straight, James Marion Russell did not die in battle and perhaps not from wounds, more likely from disease and the terrible conditions he was living in. His wife, Nancy Simms Russell, died less than a year later in Franklin County, Arkansas leaving their five children orphaned. Thirteen-year-old John lived with several families in the area, mostly relatives, earning his keep by hard work, I presume, until he married Mariah when he was twenty-one.

My knowledge of their early years together are sketchy but I do know the babies started coming and seventeen years later they had twelve children. I don't know how John made a living for the family, whether it was farming only or cutting timber or working in town. I do know that in 1888 Mariah inherited land from her father and I believe at that time her husband, John, was allowed to purchase an equal amount of land from the estate of Elias T. Turner, giving them about 100 acres of land all told. Nine years later when Mariah was pregnant with their last child, Samuel Henry Russell, she divorced John Russell. The reason for his unlikely event, I've been told, was John's selling off parts of the land Mariah inherited from her father. Divorce was almost a scandalous affair in rural Arkansas in 1897 no matter the reason and a woman with twelve children must have had very good reason to proceed with a divorce. Her grandson, Doyle J. Russell, said she was courageous and he agreed with her reasoning, that you can't live with a man who would sell off your land.

Aunt Tenn raised those children with a lot of help from her older sons and daughters and her extended Turner family as well. Her youngest son, Sam, taught her to read so that she could read the bible and sign her own name. Her second son, Elias L. Russell, lived near his mother all his life and she helped with the birth of all twelve of the babies born to Elias and his wife Addie Jane Mahaffey Russell. Aunt Tenn named all of those grandchildren too. I have to wonder about her skills as a midwife and mother. Did she raise herbs to use for healing or perhaps gather them in the woods? How did she feed those children after John was gone? Did she raise chickens and milk cows? Did she have to continue to sell off her land to support herself and family? I intend to learn as much as I can about this amazing woman, Mariah Tennessee Turner Russell who died in 1937 at the age of 84...eighty-four years of hard living.
Posted by Russell at 9:22 AM No comments: