Does Anybody Still Whittle?

Several of the Russell boys were excellent whittlers, maybe all of them. This story is about two of them, Doyle and Harold, and the wooden dancing girls they whittled during the cold Colorado winters, holed up in a small frame house on the prairie awaiting spring. I know about this because my husband Bob, Doyle's son and Harold's nephew, was a young boy in that house who witnessed the creation of these little wooden dolls and watched them dance on the handsaws held between the knees of the whittlers. 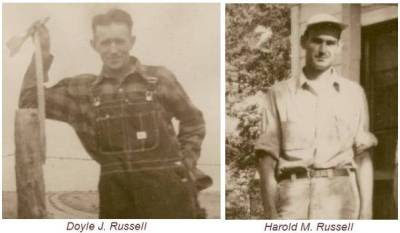 Doyle and Harold were competitive when they were whittling, each with his favorite knife kept sharp as a razor blade and as pointed as a needle. They selected their raw wood carefully, probably from a supply they brought to Colorado from the old home place in Arkansas. The dancing dolls are folk toys similar to jig dolls or limberjacks, whittled into separate pieces, arms and legs jointed with tiny metal pins, and a string attached to the top of the head. Positioned over a hand saw and held by the string, the dolls dance when the saw is thumped or vibrated. 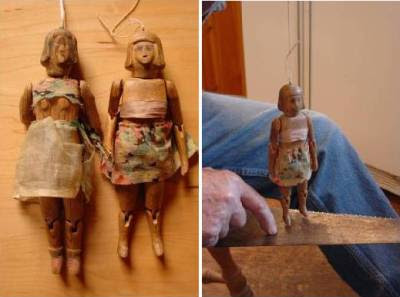 The two dolls shown above were found in an old sewing box forty years or more after they were made, the only two still in our family. Doyle and Harold whittled more than a few of these dolls during the winters of 1945 and 1946 but that wasn't all they whittled. They made sets of tiny wooden scissors, all connected to one another, long chains, balls in baskets, and puzzles, many types of puzzles. They also made arrows inside bottles, like the ships made inside bottles, and arrows stuck through small holes in a different kind of wood, leaving one to wonder how it could possibly have been done. The photograph below is a cabin Doyle made with his son, Bob, and in front of that a team of oxen pulling a sled made of corn stalks. 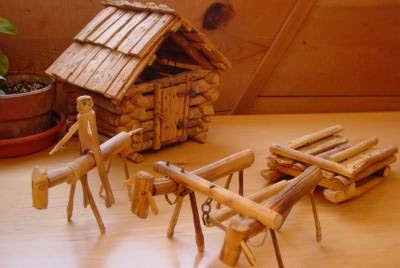 There was a time when all farm boys had pocket knives and knew how to use them well. The same knife that a boy used to skin a rabbit would cut strings on hay bales and slice an apple. Whittling was a way to hone his skill with a knife and express his creative nature. Nowadays boys don't carry pocket knives, at least not to school. Whittling is another lost art. 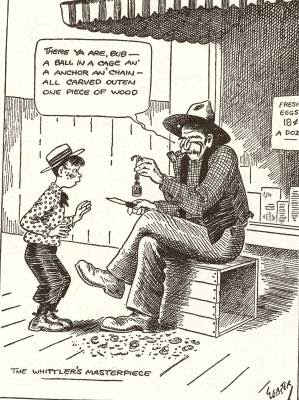