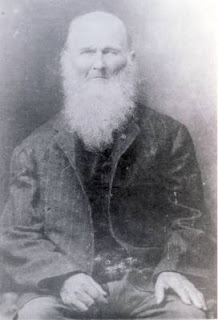 William Calvin Mahaffey , the second of seven children born to James and Ella Crawford Mahaffey, was born in or on .  That year Davy Crockett and Sam Houston were big names on the frontier and serving in Congress from the state of . The Mahaffey family apparently was on the move from the across and into where they settled in and made their home for many years. I love the names they chose for their children, Silas Harmon, Narcissa Jane, Hiram Pickney, Matilda, Jesse, and Elizabeth and more.


Their son Jesse is our great grandfather. He married his childhood neighbor and sweetheart Elizabeth Alumbaugh and their first born in 1882 was Addie Jane Mahaffey, who, in September of 1900, became the wife of Elias L. Russell of Cass .


But this article is about William Calvin Mahaffey as we follow him from birth to his death at the age of  84, a long life for that time and one full of adventure.


In 1847 when he was twenty-one years old William served with Company F, 3rd Regiment of Kentucky Volunteers under Colonel Manlius V. Thompson in the Mexican-American War. Until the end of his life William received a pension for this time of service, a pension which, no doubt, helped him through times of hardship and hardscrabble existence.


The 1850 census for Owsley Co., KY finds our twenty-four-year-old William still single and living with the Isaac and Delinia Congleton family as a laborer. The following year he married Joanna Alford Baker, a woman four years his senior and the mother of five children, a ready-made family for William and a source of farm labor. This union produced six more children over the years including our Jesse who was born in 1862.


I don’t know how this family fared during the upheaval of the Civil War years. My father-in-law, Doyle J. Russell, told me that the Mahaffeys were moonshiners when they lived in Madison County and Franklin County, Arkansas. I’ve read that Owsley County, KY was a dry county and still is today, prime territory for an enterprising moonshiner.


In the late 1870s some of the Alumbaugh and Mahaffey clans had moved on to northwestern Arkansas. Jesse and Elizabeth homesteaded 160 acres of land in Madison County, Arkansas, near Saint Paul. The 1900 census finds them living next door to their parents, seventy-three year old William C. and seventy-seven year old Joanna Mahaffey. That area of Madison County is still called Mahaffey Hill.


Joanna passed away October 3, 1905 and is bured in Madison County. William lived out the last four and a half years of his life with his son, Jesse and his family. William died January 23, 1910 after a year of declining health and was buried at the Mahaffey Cemetery near Saint Paul.

I would love to know more about this interesting man. His photograph reaches out to us, his descendants, with a look that seems to say, "There's a lot more to my story......." If you want to add or correct any of my story please write to me at pamruss@frii.com
Posted by Russell at 10:32 AM 1 comment: