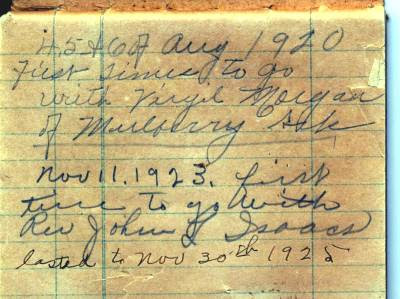 Bertie Lee Russell was the first of twelve children born to Elias L. Russell and his wife Addie Jane Mahaffey Russell. Born at home in Cass, Arkansas on April 22, 1902, Bertie lived a long life, did some traveling, and had interesting jobs, but never married. By the time I came into the Russell family Bertie was a stern, seventy-year-old woman with a reputation for being eccentric, mean-spirited, and old-fashioned. I know the woman was a much more interesting and intelligent person than the caricature I have in my mind based on a few family tales.
Recently I came across a small, brown notebook that once was Bertie's. It was in my father-in-law's possession until he died, tucked away with his own diaries. Most of the entries in this little notebook, recorded by Bertie between the years 1919 and 1925, were the kind of ditties young people wrote in autograph books, like this one,
"Spell as you wish
Write as you will
Send me your photo
By the next mail
B. L. R."
and
"A rock of salt
A rick of wood
A kiss from you would
Do me good.
H.E.M."

There are other entries about men she dated and a few about memorable events in and around Cass and Ozark, Arkansas such at this one:

"December 7, 1919 The school house at Cass burned Sunday morning at 4 o'clock, having had only one week of school. Much was the loss of books and lodge tools or emblems - had plenty of black boards and everything to promise a good school."

Bertie also recorded birthdates and marriage dates for her parents, siblings, and nieces and nephews. I know from reading some of her early entries that she was pals with her cousin Minnie Marie Mahaffey who was just two years older than she, which makes this entry especially poignant:

Elias and Addie Russell had daughters too 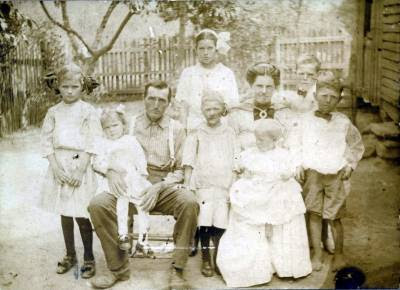 Elias Russell and his wife, Addie Jane Mahaffey Russell, had four daughters along with the eight sons shown in the stair-step photo in my last posting. The girls were Bertie Lee, born in 1902, Bonnie Sue in 1905, Nannie Elizabeth in 1908, and Nellie Mae, born in 1911. Recently I received an email from one of Bonnie Sue's great-granddaughters - what a wonderful surprise! I know so little of Bonnie Sue's life after she left home and married Robert Butner. I believe they moved to Tennessee where the Butner family was from to raise their two children. This granddaughter is hoping to find a relative who has a better copy of the family photograph I've posted here so that it can be reproduced and enlarged, suitable for framing and displaying on her wall. She has provided me with a little more information on her family than I previously had and has promised family photographs as soon as she gets her scanner fixed.
Amazingly all twelve of the children born to Elias and Addie Jane lived to adulthood and most had long, healthy lives. They were all delivered into this world by Elias' mother, Mariah Tennessee Turner Russell, or "Aunt Tenn" as she was known by many, a skilled mid-wife who was wise to the uses of herbal medicines and home remedies. She also chose the names for each of the twelve Russell children. My father-in-law, Doyle J. Russell (pictured above as the boy on the far right side in the photo), greatly admired and loved his Grandma Russell, especially the spunk and courage she showed in divorcing her husband of twenty-seven years for selling some of the land left to her by her own father, and doing so without her permission, even though this left her to bring up their twelve children without a father. At the time of her divorce the oldest child was twenty-six and the youngest was an infant, so the older children pitched in and helped their mother. Doyle felt as strongly about the love of land and the pride of land ownership as his grandmother did.
Posted by Russell at 4:30 PM No comments: