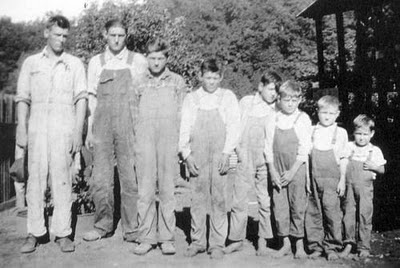 I've been using this blog site to talk about our Smith Family and have neglected the other half of my husband's relatives - the Russells. They are a big family centered in northwestern Arkansas, in the towns of Cass, Ozark, and surrounding areas but, like most families they've dispersed widely and younger Russells now live in far flung places. We live in eastern Colorado which is where Doyle J. Russell, my husband's father, came to live in the early 1930s, and stayed to raise his family. Doyle was one of twelve children born to Addie Jane Mahaffey Russell and Elias Russell, eight of whom were boys (see photo above - Doyle is second from the left). They were a healthy family and all those children reached adulthood and thrived. I know more about the boys than I do the girls simply because Doyle told me more stories about his brothers than his sisters. I plan to post additional information about this interesting branch of the family tree in the upcoming weeks - stay tuned.
Posted by Russell at 8:34 AM 5 comments: