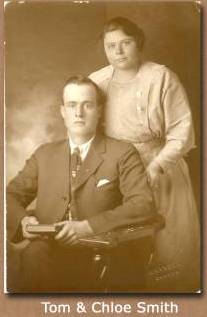 
Chloe Callender was a quiet, gentle woman with a big heart who took her place in our family in 1919, a year after the 1918 Spanish flu epidemic spirited away our grandmother Nora Jones Smith at the young age of twenty-five. Nora had just given birth to her fourth child, Jennie Frances Smith, in , where the flu was particularly virulent and also laid low Nora’s husband, Tom Smith, for several weeks. Had it not been for the constant ministrations of Tom’s mother who changed the steaming onion poultices on his chest throughout his confinement, Tom and Nora’s four children would have been orphans. Instead, mourning the loss of his wife, Tom slowly gained back his strength and continued his job of rural postal mail deliveryman and father to those motherless children.


Two hundred miles east of , as the crow flies or longer via the Continental Divide, Chloe Belle Callendar Jones was eking out a living in with her ten-year-old son, Frankie. Chloe was a recent widow after the death of her husband, Ray Jones, cooking for mining crews and anybody else who needed a good cook. Tom Smith’s wife, Nora, was a half sister to Ray Jones so Tom knew Chloe through family ties. He made the trip over east about a year after Nora’s death, married Chloe in Ault, Colorado, and brought her and young Frankie back to Moffat County, to Bare Valley, a scenic but otherwise God forsaken land ninety miles northeast of Craig where homesteaders dotted the barren countryside.


I don’t know what Tom told Chloe about the humble home awaiting her in or about his four children she would soon call her own, but I was told a story about her arrival that makes me believe she accepted that small log cabin nestled into a hillside and won the hearts and respect of those children very quickly. The oldest of the kids was Ola Mae, a headstrong eight-year-old girl who never get along well with her father and was overworked with household chores after her mother died. Someone had altered a dress of Nora’s and was insisting that Ola wear it so she would look her best when introduced to her new mother. Ola was fighting them tooth and toenail saying she would not wear the clothes of a dead person even if it was her mother. When Chloe heard the commotion she quietly told Ola that of course she needn’t wear that dress and before she did anything else to settle in she got out her sewing machine, which Tom had hauled over the mountains for her, and made Ola a new dress. Chloe’s act of kindness and understanding endeared her to Ola for the rest of Ola’s life, and it was she who told me that story of Chloe’s arrival.


Life in Bare Valley was harsh for all the families scattered across the high dry plains north of the Yampa River but it was about to get much worse for the Smith family. On , Tom’s father, William Franklin “Frank” Smith, and Tom’s younger brother, James Wesley “Jim” Smith, argued with a neighbor over a patch of potatoes and before nightfall the neighbor, A. S. Wilson, shot and killed the two Smith men. It was murder, according to the Smith family but was cleared of murdering Frank, claiming self defense, and was never tried for the murder of Jim. Neither Frank nor Jim was armed so, to this day, the Smith family feels that justice was not done.


Tom’s youngest child, Frances, had been living with her grandparents since the death of her mother in 1918 but with the violent death of his father and the subsequent breakdown of his mother Tom brought three-year-old Frances home to Chloe to join her three older siblings, ten-year-old Ola, eight-year-old Frank, six-year-old Ollie, and Chloe’s thirteen-year-old son, Frankie. That was a highly emotional time for everybody and the living quarters were cramped and primitive. Somehow Chloe kept them fed, clothed, and loved when in September of 1923 along came a new baby, William Emery Smith, Chloe and Tom’s son, the first of two children they would have together.


During the summer of 1924 the family was struggling with crop failure, spats with neighbors, and lack of income when an incident of theft by some young boys at the only store in the valley led to accusations that sixteen-year-old Frankie was involved. His parents were given a choice, get Frankie out of or he would be charged with theft and have to face the consequences. The little store also housed the U.S. Post Office so Frankie's crime may have been a federal offense. The family packed up their belongings on a couple of covered wagons and despite the deteriorating weather conditions and the onset of winter headed east toward , driving a few cattle and riding horses. That story is posted here: http://www.viewoftherockies.com/CraigtoPurcell1.html


Chloe Smith lived another fifty-five years after the family pulled out of and returned to eastern . She gave birth to her daughter, Marion Lillie Smith, the summer of 1926, a pretty little girl we all came to know and love for her funny and loveable personality. There was another baby after that but she was stillborn and buried in a small homemade box in the yard of the rental house where the family then lived. Then came the awful loss of her son, Frankie, who died of tuberculosis at the age of twenty-four.


Chloe came from a large family of eleven brothers and sisters many of whom lived close by and who supported her with visits and friendship over the years. Her parents, Rosa Belle and Emery, also stayed important in her life until their deaths in 1927 and 1938, respectively.


Tom and Chloe moved to late in life and enjoyed the benefits of “living in town.” She buried Tom in 1960 after more than forty years together, tough years, years of loss and heartache, but you would never guess that if you spent time with Chloe. She had an ever-present smile and conducted herself with grace and serenity. She helped Tom Smith raise his four wild, motherless children to adulthood and I do believe it was Chloe’s loving influence that shaped them, saved them, gave them a foundation. William and Marion loved their mother immensely and helped her survive the loss of her firstborn, Frankie.


Chloe Belle Callender Jones Smith played a very important role in the Smith/Russell family. She was small in stature but there was nothing small about the positive influence she had on our family. I have never heard a single negative thing said about her. What a legacy.