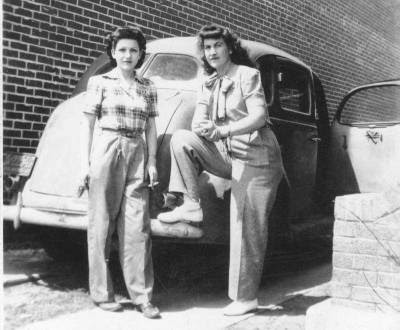 (photo - Betty Jo Barton and her mother Julia Ellen Smith Barton, circa 1944)
Cheryl Moore, genealogy line....{FRANK....JULIA....BETTY....CHERYL} has a wonderful family photograph of her mother, Betty, and Betty's mother, Julia, taken in 1944 when both worked as riveters on airplanes at Tinker Air Force Base in Oklahoma City, OK. Cheryl has offered the photograph and letter written by her mother for publication here for the Smith clan to enjoy. By the way, this subject came up just the week before Halloween because Cheryl's granddaughter, Liza, has chosen a Rosie the Riveter costume for Halloween this year.
Here is Betty Jo Barton Gaston's letter of approx. 2005:

In May of 1943 I, Betty Jo Barton, graduated from Wilson Consolidated School #2. This was a country school 12-1/2 miles SW of Frederick, Okla. My father, TJ Barton, managed the country gin called Red River. That summer he accepted a job with the Coop Cotton Oil Mill at Okla. City and we moved there. We lived on 23rd St. which is a segment of old Highway 66. Traffic zoomed past our house 24 hrs. a day, but I don't remember it bothering anyone because you can and do get used to almost anything.

Now I had to decide what to do. My mother, Julia, and I went to work at Tinker AF Base. I was a clerk-typist and she drove for the civilian motor pool. After a year she became unhappy with her job there and wanted us to apply as riveters. I said, "Mother, are you crazy? We don't know how to rivet?" She said they'd teach us and we entered their 10 day training program. When we finished, they put us on the production line at the Douglas plant there at Okla. City. I think they said the bldg. was a mile long and there wasn't one window in it. That was so we could have worked during a black-out. We were put on the 2nd shift which was from 3:00 p.m. to 11:00 but they wouldn't allow kin to work in the same dept. I worked on the tail section and she on the dorsal fin. All our work was with flush rivets. We were only allowed like maybe 40 min. for our noon time. That had to include eating--going to the restroom and smoking. I developed a terrible habit of eating too fast which has stayed with me through the years, and that was 60 yrs. ago!

The pay? My base rate was .75 an hour--but we felt liberated in that we were getting jobs that up to then had only been for men. My future husband, Gwen Gaston, was helping fight the war in France and his monthly pay was $20.00. It was very hard work and very noisy, but so what? WE WERE HELPING WIN A WAR! We worked 6 days a week until our boys hit the Battle of the Bulge and then it was 7 days a week until that crisis eased up.

Life was very hectic at our house. My aunt lived with us and she worked the "grave yard shift" which was from 11:00 p.m. to 7:00 a.m. Juanda, my sister, rode a bus to the downtown highschool. Rose, the younger sister, took a bus to the nearest Jr High school. My little brother walked two blocks to his grade school. He had this huge German Shepard dog that made the trip with him each morning and then returned to school at 3:00 to walk home with him. Part of the time my Dad was in the OKC office but through the week he was mostly on the road as the field representative, visiting the state gins to buy cotton seed.

I do not think the lights nor the stove were ever turned off! We also had to deal with the ration books that were issued to each family member. Certain stamps were designated for canned goods--coffee--sugar--shoes and gas. I don't remember meat or vegs being rationed but you had to go to the ration board and get down on your knees and beg for a permit to buy a tire. Mother and I drove an old 1930 something Ford that had serious fuel pump problems. As we struggled with it one night I told her I felt sure I had nearly pushed it as far as I had ever ridden in it!!

But in some ways the times were good--that people did have jobs. We weren't afraid to shop the stores at all hours of the night..and I hardly remember that we locked our doors. It's a different world today. We've lost so much that we had then. We did have some crime but it was not the "front page" "big time" issue that it is today. How I wish God would grant us some easier times in the coming years.

Betty Gaston
Posted by Russell at 9:28 AM No comments: