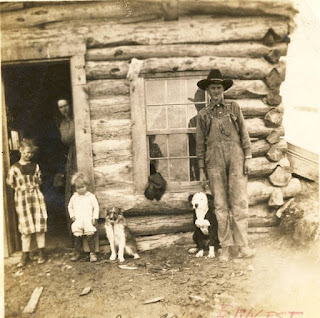 My mother-in-law, Frances Smith Russell, was born in Craig, Colorado, during the Spanish Flu pandemic of 1918. In her postpartum weakened condition, Frances’s mother, Nora Olive Jones Smith, succumbed to the flu October 23, 1918, in Craig, leaving five-week-old Frances and her three older siblings without a mother and Tom Smith without a wife. The family had been living temporarily in Craig so that Nora could be close to a doctor when her baby was born. After her death they returned to their distant cabin home ninety miles northwest of Craig, a place called Blue Mountain, a small community of homesteaders barely eking out a living while trying to prove up on their land.

The story of her Smith family there in rural Moffat County was told by Frances in her autobiography “From There to Here”, a self-published book written in 1985. I am in the process of integrating two version of that book that Frances wrote, adding illustrations, and plan to make it available online this year. But this story is not about those years from 1918 until 1923 when Frances and her family moved “lock, stock, and barrel” across the Continental Divide to Weld County, Colorado. This is about a trip Frances made back to Moffat County in 1980s in search of that cabin on Blue Mountain. 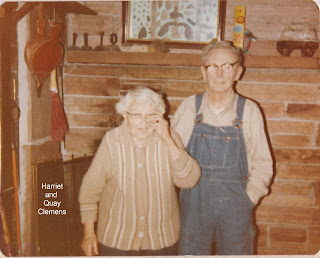 Harriet Clemens was a friend of Frances who lived nearby in northern Larimer County, Colorado. Married to Quay Clemens, possibly a distant relative of our beloved author Mark Twain, aka Samuel Langhorne Clemens, Harriet and Quay had both lived in Moffat County in the 1930s. Prior to that while still a bachelor Quay lived by himself in a small cabin near Blue Mountain and one night gave shelter to the man who murdered Frances’ grandfather and uncle on Blue Mountain the 5th of October, 1921. That story is told in Frances’ book.  The murderer, A. S. Wilson, ran from his home, afraid for the repercussions of his actions, and late that night or the next appeared at Quay’s remote homestead. He told Quay, “If you know what I’ve done you won’t want to help me,” to which Quay replied, “I don’t care if you nailed Jesus to the cross for it’s been 90 days since I’ve seen a living soul. Come on in.” So, Harriet had an interest in that part of Colorado. 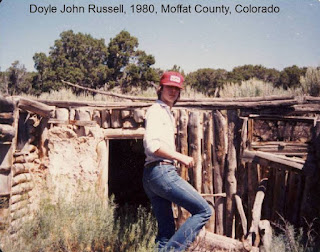 Fast forward to the the early 1980s, recently widowed Harriet Clemens was interested in visiting Moffat County again, approximately forty-five years after she moved away. And more importantly, Frances Russell wanted to locate the cabin where her parents lived in 1918, where she lived too, until age five. She had visited the area in 1980 with her son Kenneth and his boys, David and Doyle. They were not successful in finding the actual cabin of Tom and Nora Smith, Frances’ parents, but they did find other abandoned log cabins a few miles away.

Frances saw an opportunity to look once more for the old Tom and Nora Smith homestead, so driving a almost new, two-wheel-drive yellow Dodge Omni, Bob and I embarked on a trip from Fort Collins, Colorado, to a remote area ninety miles northwest of Craig, Colorado, with Frances and Harriet in the back seat, a weekend adventure we’ll never forget. 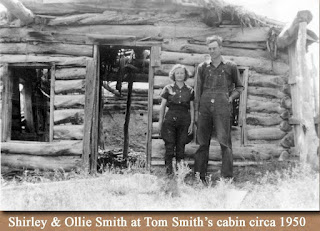 Frances relied heavily on the memories of her older sister, Ola, to prepare for the trip, as she had done when writing her autobiography. Ola lived in Blythe, California, and would not be traveling back to Moffat County but by way of telephone and letters the sisters made a map. They also had photos taken back in the 1950s when their father, Tom Smith, and several of his family members went back to the old log cabin and relived the challenges and tragedies of their years there, and visited the graves of their loved ones who never left Blue Mountain.

Harriet’s preparations were simple. She packed butter sandwiches for all, home grown pickles, and brought her nightgown and walking stick. 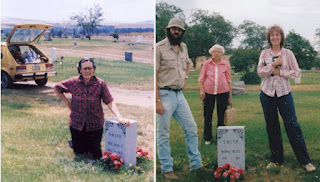 When we arrived in Craig we visited the Craig cemetery and took photos of the new headstone Frances and her siblings had recently commissioned and had installed over their mother’s grave. We spent that night in a modest motel in Craig, sharing a room with two beds, a frugal choice. Bob, a stranger to pajamas, waited until the ladies were finished in the bathroom and tucked into bed before slipping out of his clothes and into our bed. 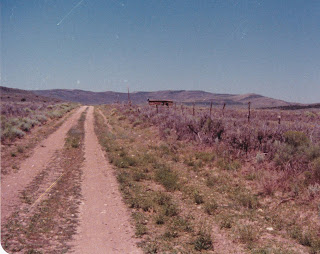 After a hearty breakfast the next morning we headed west out of Craig and listened to the reminiscing in the backseat. Harriet remembered friends who lived along Colorado Highway 40 and thought she might like to stop and see if they still lived there but we decided to consider that on the return trip. That day our excitement built as we turned off the Highway 40 at Elk Springs and headed north and west in search of the place names Blue Mountain, Bare Mountain, (also spelled Bear Mountain), Cross Mountain and more, places Ola had recalled from her youth.

Toward noon, following the hand drawn map Frances held in her lap, we found ourselves on a rough, dirt road out in the middle of nowhere, feeling frustrated, when in the distance Bob spotted a pickup truck and beside it a man mending a wire fence. We drove up beside him and got out to talk, describing our mission and asking for his advice. He pointed off to our left and said that there was no road, we’d have to drive across the open prairie, but if we headed in the direction he pointed we’d come to place where the land dropped off, and if we’d park on the top of that ledge and walk down the steep slope, then turn around and look back we would see several dugouts in that hillside. Oh, how fortunate we were to come across that young man who knew about those dugouts! 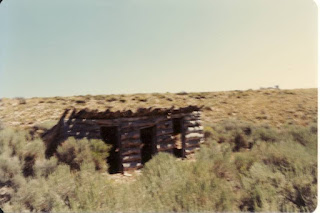 So off we went driving that little Dodge Omni across the prairie. I remember how the scent of hot sage filled the car. It was great fun bouncing and laughing and all of us full of hope and behaving like teenagers. Only now, in retrospect, do I know how lucky we were that our catalytic converter didn’t start a prairie fire. 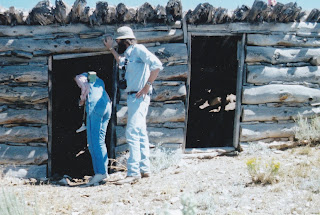 Sure enough, we came to a ledge where further travel in the car would not be possible. We parked and got out, ready to explore, only to realize that Harriet could not safely climb down the slope. We decided to spread out a picnic lunch and make it comfortable for her while we scrambled down the hillside in search of the dugouts. 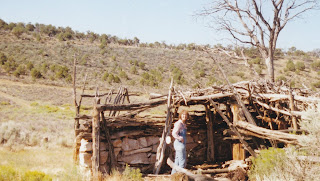 There were several! We thought we’d hit the jackpot. But after examining each one realized none of the log cabin remnants backed into that hill matched the layout of the windows and door in the front of Tom Smith’s cabin! We had the photo right there with us to compare. We knew we were in the right area but never did find the exact cabin we were looking for. Our best guess is that the logs were hauled away and used for fence posts. 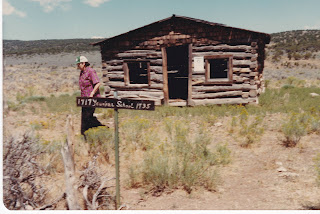 After we took as many photos as we wanted and cleaned up our picnic area we headed back in search of the log school house that the Smith kids attended when they lived in Bare Valley. Named the Yougal School, we did find it but it had been moved from its original location. At least our trip was successful in that regard. More photos, and then we headed back toward Craig.

Frances and Harriet talked all the way back and we knew Harriet held out hope of locating an old friend or two but Bob and I were tired and wanted to get home that same night so we more or less convinced Harriet it would be too difficult looking up friends from fifty years ago. I am sure she was disappointed. We continued eastward. I don’t remember our route back to Fort Collins but I believe we turned south and stayed in Colorado coming back along the Poudre River route.

That’s the end of my tale of our great adventure with Frances and Harriet but that’s not the end of the story about Blue Mountain and Bare Valley. Bob’s older sister, Mary Simms, organized a return trip there with many Smith relatives in 2011. After much research, they located and marked with metal signs several homestead sites, hopeful that later generations of the Smith clan will visit and find evidence of this time, now about a century ago, when the Smith family homesteaded on Blue Mountain, Moffat County, Colorado.

I went with Mary and other relatives in 2011 to see that remote place. Please make the book that you are putting together available for the Smith family relatives. My grandmother was Rosa. Who are the people in the photo?

I sure enjoyed your adventure Pam. Next time I decide to take off on an adventure. I want you to go with me.