Doyle Russell and the Hooey Stick Doyle Russell liked magic tricks. He had little boxes with springs, strings, wires, and sliding drawers that he could pull out of his pocket and engage a stranger’s attention with his magic tricks as they stood at an auction or waited in line for a drivers license. I remember one trick in which he had three curved, flat pieces of wood, similar to boomerangs, that when aligned a certain way were the same length, but when Doyle said his magic incantation and pulled one of those pieces under his armpit to “stretch” it, lo and behold, it was longer than the other two. And, unbelievably, he could push it back under that arm and shrink it back up! Another was an elaborate set up using sheets hung over a doorway and shadows on the ceiling, a parlor trick. Over the years Doyle’s family would give him store-bought magic tricks for his birthday or Christmas and he would try them out, laugh a couple of times, then set them aside. He preferred those he made himself. 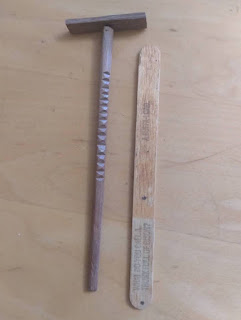 Sometime in the 1950s Doyle’s wife’s cousin, Tilford Barton, came to visit Frances and Doyle from his home in Oklahoma. Apparently, Til and Doyle were kindred spirits for Til brought with him his own favorite tricks and one of them was a “Hooey Stick”. (Other names for this Appalachian folk toy are Whimmydiddle, Gee Haa (horse commands for left and right), and Truth Stick.) This is a little wooden folk toy that is a simple round stick about five inches long, 1/8” diameter, with notches carved along the length of it with a small piece of wood nailed onto one end to create a sort-of helicopter blade or propeller. Holding the hooey stick in one hand and in the other a popsicle stick Til could make the propeller spin by rubbing that popsicle stick along the notches. The magic came in when Til could make the propeller spin clockwise then stop and spin counterclockwise at will. 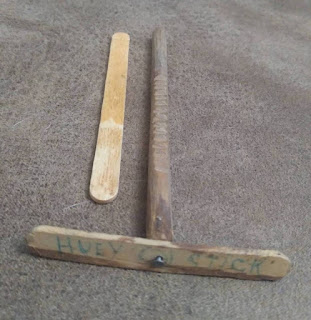 Doyle was smitten. He loved that Hooey Stick and soon he was carving them by the dozens and collecting popsicle sticks to go with them. He kept several in his overall pockets, year 'round. And he added his “gift of gab” to his presentation in this way. If he met a family with a shy child he might show them the hooey stick and ask a few questions, such as “Hooey, if this little girl has blonde hair, spin to the left” and that’s what Hooey did. And the girl and her parents were impressed. The next question might be “Hooey, if Susie is wearing white shoes, spin to the right” and immediately without any seeming change in what Doyle was doing, the little blade spun to the right. And then he would say, “Hooey, if this little girl likes boys, spin to the left again”, and, of course, Hooey spun to the left. And that brought on the laughter, giggles and denials. Usually, Doyle would end up selling a Hooey stick to the parents for one dollar, but he didn’t explain just how to get Hooey to change directions. They had to try to figure that out themselves. With no internet, no Google, and no YouTube, those Hooey Sticks were probably tossed away after some frustrating attempts. Rather than explain the magic, I am inserting a YouTube link. https://youtu.be/nPcOXeBsSiQ

Doyle suffered a stroke when he was in his seventies. We received a phone call that he had been taken to the hospital. Bob and I didn’t know what to expect when we got there, didn’t know if his dad would be paralyzed or not, didn’t have any idea of the severity. When we walked into his room Doyle was perched on the corner of his hospital bed in that little gown that tied in the back, a nurse standing in front of him while he said, “Now Hooey…..” 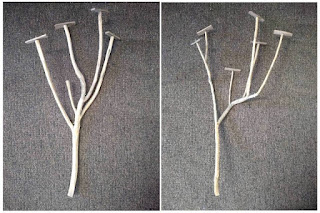 Doyle created his own Hooey Stick style using multi-branched weeds, like tumbleweeds, which he carved with notches and nailed on the spinning pieces so that he could tell Hooey to spin two or three propellers one way while the other two or three spun the other direction. Over the forty-some years Doyle made and sold his Hooey sticks he took in hundreds of dollars selling them for one dollar each and somewhere along the way increased his price to two dollars. 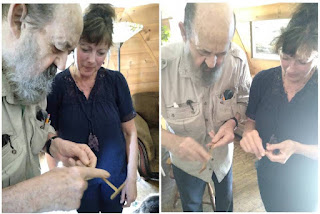 A couple of weeks ago Doyle’s first cousin once removed, Liz Buness, visited us for the very first time. In telling her about her cousin Doyle we got out a few Hooey Sticks and demonstrated their magic, sending her home with her own. Doyle was an interesting man and we could have spent hours telling Liz about his life, but it seemed fitting to introduce her to Hooey Sticks and let her associate her cousin Doyle with his
Hooey magic.